Home › Blog › Nature’s first aid kit: a fungus growing on the side of birch trees

Nature’s first aid kit: a fungus growing on the side of birch trees 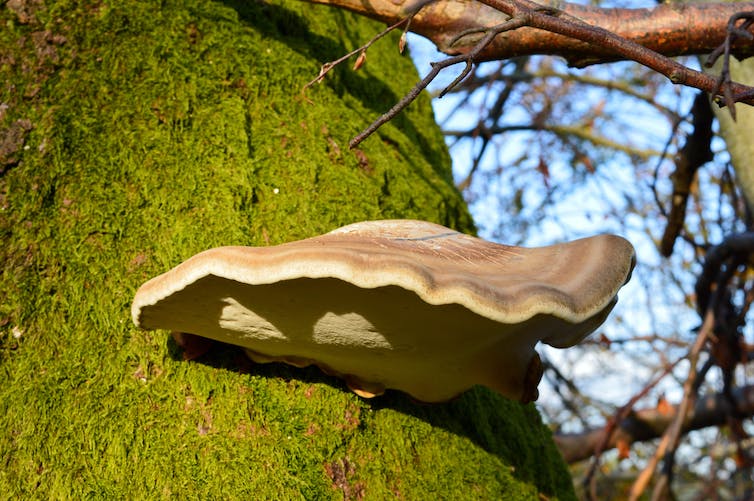 If you’ve ever stopped to admire a birch tree, you may unknowingly have something in common with a 5,300-year-old mummy called Ötzi. In 1991, hikers found Ötzi in an alpine glacier on the Austrian-Italian border, and perfectly preserved with him were pieces of fungus attached to leather cords, safely stowed in his bag. That fungus is the same one you can see growing on birch trees today: the birch polypore.

Sometimes called birch bracket, and known to scientists as Fomitopsis betulina, the polypore is a parasite that slowly kills the birch before feasting on the dead tree until there is nothing left.

The scientists who first identified Ötzi’s ancient birch polypore speculated that he could have used it for medical purposes, as some European cultures in more recent human history have been known to do. 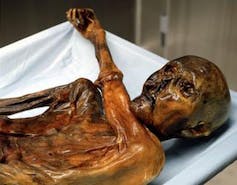 With recorded applications ranging from pain relief, wound dressing, antiseptic and even cancer treatment, birch polypore has been used as a broad spectrum therapy for various health problems. But is there a true medical basis behind the anecdotal folklore?

Numerous studies have revealed that birch polypore does indeed produce compounds with antibiotic, antifungal, anti-inflammatory, antioxidant, and anticancer properties. Piptamine, polyporenic acids and triterpenoids are all compounds produced as part of the fungus’ self-defence mechanism against bacteria, explaining its observed antibiotic value. When tested on dogs and mice suffering from cancer, as well as cancerous cells grown in the lab, birch polypore extracts had a range of anticancer effects such as reducing tumour size and cell growth.

It’s hard to identify the mechanisms producing these results, however, as the activity of specific birch polypore compounds is not well understood – they have mostly been studied together in one combined extract, rather than individually isolated. Even more intriguing is that this whole cocktail seems to be more effective than single compounds, which may be a result of a synergistic interaction between the separate ingredients. Further research will be needed to disentangle the relationships in the birch polypore cocktail.

Pharmaceuticals are not the only thing that we can look to birch polypore for, though. All fungi have cells walls predominantly made up of things called polysaccharides. The most abundant of these is chitin, which also gets converted into another polysaccharide called chitosan. Both chitin and chitosan have roles in keeping cells hydrated and help protect from bacteria and other fungi, making them ideal components of wound treatments such as hydrogel, membrane and sponge dressings – with the additional benefit of being biodegradable. 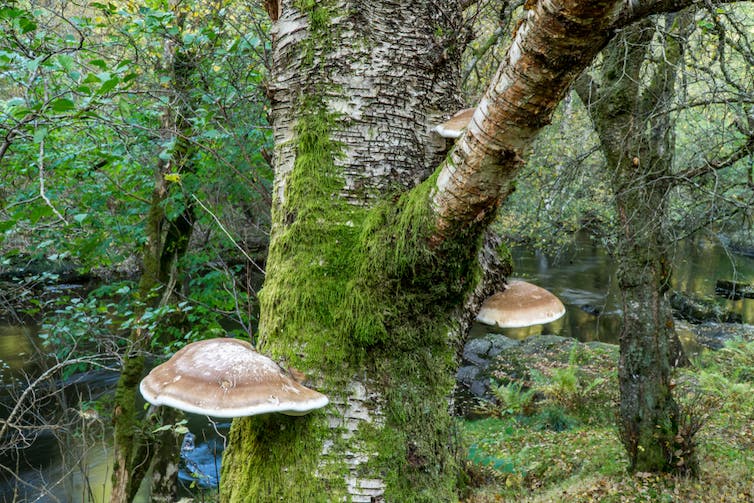 Birch polypore can come in many different shapes and sizes, but they almost always grow on birch trees. Christopher Willans / shutterstock

Another kind of polysaccharide found in fungal cell walls are D-glucans, which have been shown to help regulate the immune system, as well as having some anticancer and antibiotic activity. A specific type of D-glucan in birch polypore is also able to speed up healing by accelerating the movement of cells to the wound site.

Look to the Fungi for new medicines

While the medical explanation is plausible, we will never categorically know that Ötzi used his birch polypore to treat injuries or ill-health. What we do know, thanks to modern chemical analysis, is that the historical use of birch polypore is grounded in real medical properties.

The State of the World’s Fungi report, produced recently by my colleagues at the Royal Botanic Gardens, Kew, highlighted how important fungi have been for the discovery and production of drugs, but also how little we have explored the vast fungal diversity for such uses: addressing new challenges such as antibiotic resistance could well rely on the potentially over 3m unknown species. Fungi have evolved extraordinary compounds and mechanisms which we can utilise for human health, and traditional practises – as in the case of the birch polypore – can act as a signpost for where to look.

This article is republished from The Conversation under a Creative Commons license. Read the original article.

« Burger and Chirps
Did you know…..five interesting and slightly scary facts about the Earth we live on! »