This piece is part of a series by the King’s EOES group reporting on the ‘Space – the final frontier for biodiversity monitoring?’ Symposium hosted by ZSL on Friday 29th April 2016. The article was originally posted on the EOES hub.

Satellite remote sensing and the IUCN Red List of ecosystems

The role of satellite remote sensing in ecosystem risk assessment, particularly in how it is used as part of the Red List of Ecosystems (RLE), was discussed by Dr Emily Nicholson, from Deakin University in Australia, at the ZSL Symposium on Remote Sensing for Biodiversity.

Most of us have heard of the IUCN Red List of Threatened Species.

It is the traffic light system that assesses the conservation status of species (as well as subspecies, varieties, and even selected subpopulations) on a global scale, and classifies them into categories such as Extinct, Critically Endangered, Vulnerable, or the best option, Least Concern. It does this to highlight taxa threatened with extinction, and promote their conservation. It’s been going for 50 years, so has an established assessment methodology. 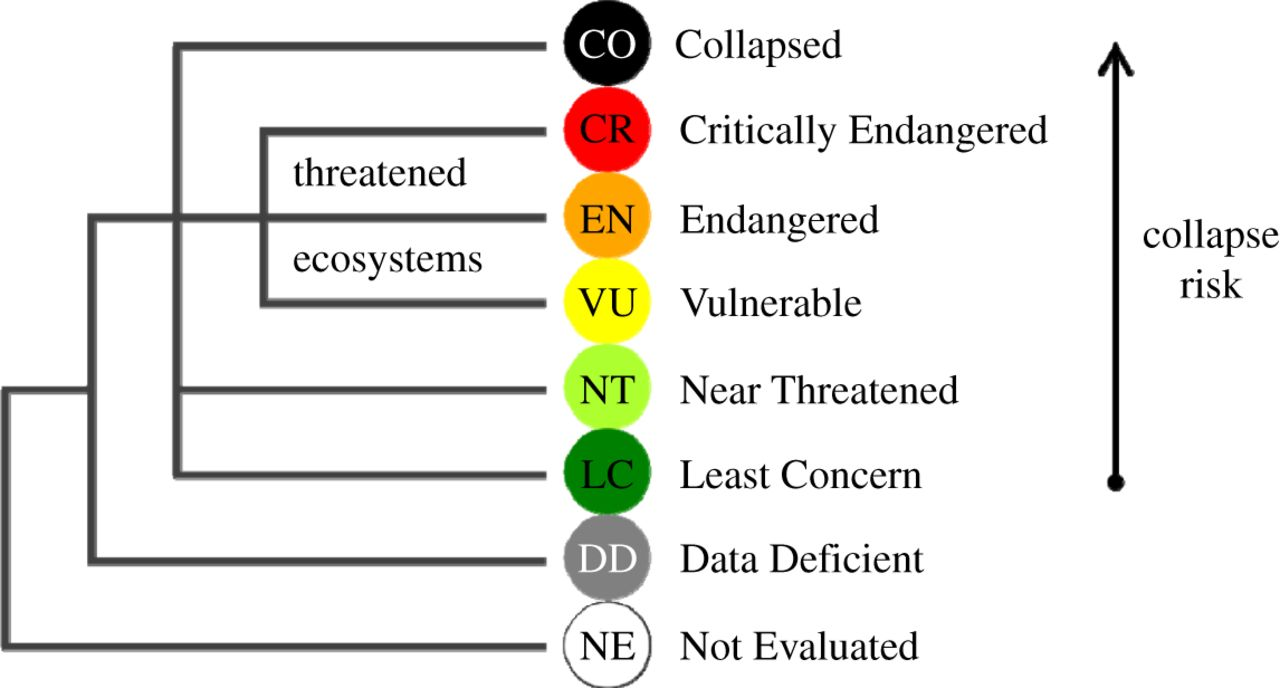 Structure of the IUCN Red List of Ecosystems categories, from KCL EOES Hub

The IUCN has recently expanded this risk assessment approach to whole ecosystems. The risk categories are similar to those for Threatened Species but with the difference that instead of ‘Extinct’ for lost and unrecoverable species, ecosystems are “Collapsed”, which occurs when there is a loss of defining features such as species, structure and processes.

Dr Nicholson’s talk [3] emphasised that given the patchiness (both spatially and temporally) of field-data, satellite remote sensing (RS) data can play a critical role in the definition of ecosystem types, evaluating their distribution and change in distribution, and in assessing degradation and change in ecological function.

The Future of RS Data in RLE

Given the paucity and patchiness of field-data, satellite remote sensing (RS) data can play a critical role in ecosystem assessments. Dr Nicholson emphasised that RS provides tons of data with ever greater spatial & temporal resolution. However, the challenge is to use it thoughtfully to ensure it is ecologically meaningful, and describes ecological processes and functions, not just patterns.

Interestingly, it was pointed out in the questions after the talk that all satellite remote sensing needs field validation and often not enough money is put aside in grants for this.

Read the full version of this article on the Kings EOES Hub.